In December 2014, a rockslide occurred in Seymour River Canyon, approximately one kilometre north of Riverside Drive, in the Lower Seymour Conservation Reserve (LSCR). The rockslide, which partially blocked Seymour River, is made up of an estimated 50,000 cubic metres of rock – that’s enough rock to fill a 13-story apartment building. As a result of the blockage the water level upstream increased, flooding area trails and the historic Twin Bridge. For safety purposes, both part of Fisherman’s Trail (from Mystery Creek to the Twin Bridge) and Bottletop Trail were closed and the Twin Bridge was removed.

Where are we Now?

To ensure the network of trails offered in Seymour River Canyon continue to be safe and accessible for recreational users from around the region, Metro Vancouver is in the early stages of gathering input on:

∙        operational access to east side of Seymour River

Metro Vancouver recognizes the importance of the impacted trails and is committed to working closely with the community to address concerns, discuss options and identify new opportunities for the LSCR trail network in Seymour River Canyon.

Metro Vancouver wants to hear from you. In June 2015, Metro Vancouver is hosting a public meeting to discuss progress, gather input, listen to feedback and answer questions. Please join us:

RSVP: If you are interested in attending, please visit www.trailconnections.eventbrite.ca to register or call Metro Vancouver’s Information Centre at 604-432-6200. 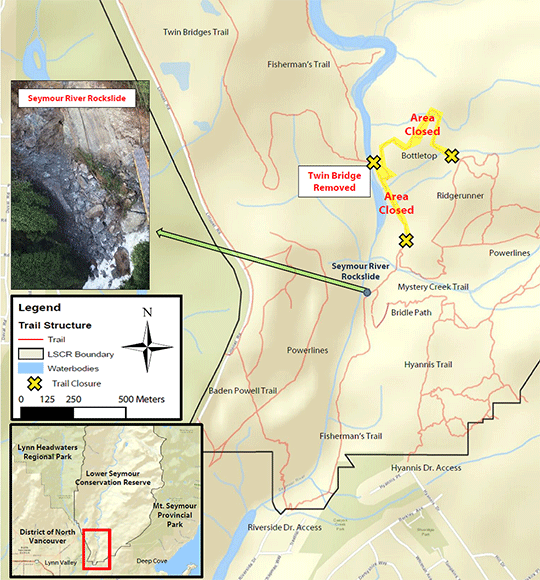 Some hard facts about the Seymour River Rockslide:

In a 1 in 10 year flood event, the existing bridge at Twin Bridges would be under 4m of water. The bridge will be removed in the very near future. There are no short term (3-5 years) options for a new major crossing at this location.

The Fisherman's Trail will be decommissioned between Twin Bridges and Mystery Creek Trail. There are thousands of trees along the edge of the trail that are currently underwater, many are already falling down. All of these trees will die in the next two years and they will take most of Fisherman's Trail with them. Metro Vancouver is being proactive to decommission the trail for safety considerations (danger tree hazards).

In a 1 and 50 year flood event, the exit of the Bottletop trail would be under 4m of water. The Bottletop trail is closed indefinitely. Even though it has been signed, flagged, and taped off, people are removing the tape and riding it. Over 50 people rode it today. This trail is low on the list of Metro Vancouver's worries right now and if people continue to use it and cause frustration for Metro, they will decommission the entire trail immediately. If people stay off the trail, then there will be an opportunity to work with the NSMBA to reroute the bottom section of the trail to meet up with the Mystery Creek trail at Fisherman's. Bottom line: Don't ride Bottletop or we will loose it permanently.

The Ministry of Environment and Department of Fisheries and Oceans will be meeting with Metro as soon as possible to discuss that fact that fish will be knocking on the door in a few months and they have no where to go.

This is a shocking change to the landscape, and we have lost a critical connection across the Seymour river that has been there since 1908.

The conditions in the Seymour River and at the Rockslide are stable.

Pooling of water behind the partial blockage has caused flooding of trails and forested areas next to the river. This has created potential risks to public safety and resulted in trail closures. Hazard assessments are continuing, although it is clear that the area around Twin Bridge presents significant danger to people using trails in the vicinity.

The extent of trail closures is being refined, and trails unaffected by the flooding will be reopened when assessments are complete. Additional information on trail access is expected to be finalized and communicated by the weekend.

Public access to potentially hazardous areas remains closed (and all Metro Vancouver watersheds are currently closed as is the practice during periods of heavy rainfall). Hikers and visitors to the Lower Seymour Conservation Reserve are strongly urged to respect the closures as identified on extensive signage and by on-site staff.

The naturally occurring slide occurred at approximately 5:30 a.m. on Sunday morning, and comprised some 30 - 50,000 cubic metres of rock. Several very large boulders, including one the size of a house and estimated at 3,000 tonnes, along with other rocky debris partially blocked the river. Monitoring of river flows and the slide has determined that the partial blockage has stabilized and the channel has widened, allowing for additional flow to pass unimpeded.

Flooding of trails and forested areas in the Twin Bridges area has created dangerous conditions for hikers. Trails are closed to all public access. Closed areas and trail access points are clearly signed, and major routes are staffed.

The extent of trail closures is being refined, in conjunction with the District of North Vancouver, based on hazard assessments. Additional areas are expected to be reopened by the weekend

Some trails may remain closed permanently

The public is urged to respect the closures that are in place for their safety and the safety of watershed staff.

Potential for flooding downstream arising from the rock slide is low.

Monitoring of the rockslide and its impacts continues The drinking water supply remains unaffected.

§  Closures are also currently in place at Hyannis Point and Incline that will likely be scaled back as we get through the rest of the next couple bouts of weather.

Update: 12:30 p.m., Tuesday, December 9, 2014
Conditions in the Seymour River and at the rockslide remain stable. The naturally occurring slide occurred at approximately 5:30 a.m. on Sunday morning, and comprised some 30 - 50,000 cubic metres of rock. Several very large boulders, including one the size of a house and estimated at 3,000 tonnes, along with other rocky debris partially blocked the river.
-Monitoring of river flows and the slide determined that portions of the blockage settled overnight, widening the channel and allowing for additional flow.
- Potential for flooding arising from the rock slide remains low.
- The rock slide itself has settled, doubling the channel width and improving flow past the partial blockage.
- Heavy rainfall is increasing water levels in the Seymour River and in water courses throughout the region - the rockslide is not a factor in that increase.
- Metro Vancouver, DNV and its consultants continue to monitor conditions.
- The drinking water supply remains unaffected.
- Trail closures - specifically the Homestead, Fishermans and Twin Bridge trails - remain in effect and may be extended to include other areas. MV Watersheds, including the LSCR, are temporarily closed, as is common practice, due to the heavy rainfall. Residents are urged to stay away.